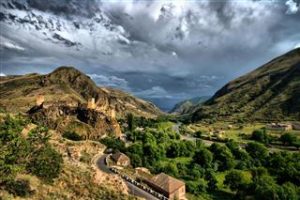 Citrus groves, snowy mountains, sandy beaches and gregarious hosts – Guria offers all these to you. Music and singing play a vital role in Gurian culture, where people are known to have conversations in humorous verse. The amazing, yodel-like Krimanchuli (the word means ‘twisted iron’) signing style originates here, when up to seven different voices harmonize in a chaotic yet awe inspiring feat of musical dexterity – you have never heard anything like it. Another Gurian favorite is Naduri, a special song performed while working in the fields. Traditionally, the song would last for longer than an hour and over 200 people sang it together during work.

There are no large towns in Guria, but that is more than made up for by the hundreds of picturesque villages that dot the landscape. The warm, wet climate here during most of the year led to the development of a charming vernacular style, with delicately carved wooden houses perched on brick columns to maximize air flow. To this day, there are whole villages built in this charming way.

Guria is also home to some of the most fascinating and well-preserved traditions in Georgia. Every Easter, the village of Shukhuti erupts into a massive, free-for-all rugby-like game called Lelo, officiated by the local priest. This is the last place this game, once common throughout medieval Georgia, is still played, and the sight of villagers chasing after a huge, 16 kilo leather ball is not to be missed. During the summer, in the mountain village of Bakhmaro, Georgia’s biggest traditional horserace takes place, with dozens of riders going hell-for-leather over the alpine pastures. Indeed, Gurian horsemanship is world-renowned. In the 1880s hundreds of Gurians were recruited by Buffalo Bill to take part in his Wild West Show (they were erroneously marketed to the public as ‘cossacks’). Their tricks wowed the crowds for years, and it is thought that many of the stunts seen in Rodeos today were brought to America by Gurians.

Ureki is a small town in Ozurgeti municipality. It is located at the coast of the Black Sea, 4 m above the sea level, to the north and to the south it is surrounded by the rivers of Sepa and Supsa and to the east surrounded by Tsvermagala mountain.

Ureki is a seaside climatic resort. The climate is wet subtropical here. It is famous by its magnetic sand. Recommended for the treatment of cardiovascular diseases.

Nabeglavi- village in Chokhatauri municipality. This place is a climatic resort and contains mineral water like Borjomi. Recommended as a drinking curative water.

The Palace of Gurieli was built in 1873 as a residence and seat of the Princes of Gurieli. In the period of former USSR here was established a museum, which exhibited information about all the regions of Georgia. Later it was transformed to a chapel and then a church, while from 2008 onwards it is a seat of Bishop.

Shemokmedi Monastic Complex of middle centuries is located in Shemokmedi (Georgian word for “creator”) village, on the left side of Bjuji river, 7-8 km away from Ozurgeti town. Shemokmedi Complex consists of three churches; the earliest from 12th century and two others from 16th (one of them was renovated in 1831).

Monastic Complex of St. John the Baptist of the Desert is located in Chokhatauri municipality, north from Shuaganakhleba village. Monastic complex includes two churches; one of them is built in the rocks of the mountain. Date of foundation is unknown but according to the scientists churches could be built in the 6th century.

Desert Monastery of Saint John the Baptist was rich with its library (ancient Georgian manuscript). There was also significant fund of books. These books were sacrificed by Imeretian kings, queens and others.

Jumati Church of Saint Michael and Gabriel is located in Guria region, Dzirijumati village, 14 km away from Ozurgeti. Date of foundation is unknown. Church of Jumati is famous for its ancient icons, intresting inscriptions of historical persons and dates. There was also valuable Saint George’s icon which according to scientists was made in XI-XII centuries. However, this icon was stolen in 1921, and yet not founded.

Church of Achi was built in XIII-XIV centuries, and is located 9 km away from Ozurgeti town. The legend tells that supernatural entity called Daeva was threatening Achi village. The residents of village prayed and appealed to Saint George for saving their village, thus he killed Daeva. After that grateful residents built this church and dedicated it to St. George.