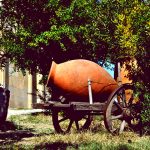 The Taste of Georgia 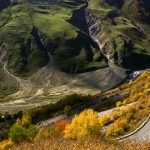 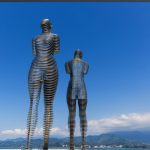 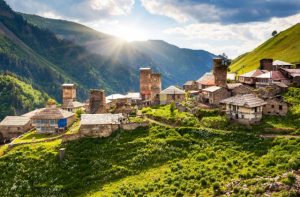 The highest permanently inhabited place in Europe, Svaneti truly has to be seen to be believed – and first time visitors can be forgiven for thinking that they have stumbled into to a big-budget Hollywood fantasy epic. Svaneti is true highland territory, with several peaks rising to over 5000 meters, and some of the most challenging mountaineering anywhere in the world. In spite of the altitude, the warm, wet winds flowing from the nearby Black Sea moderate the climate, making for pleasant summers and surprisingly mild winters.  Lower in the deep valleys, this moisture produces what is known as a temperate rainforest, and in the highlands the mountain slopes are covered with pines and hornbeams. But aside from the stunning natural beauty, the region’s real treasure is the culture of its people – the Svans. With their own language, related to but distinct from Georgian, their own ancient traditions and crafts, and their immense sense of honour, Svans have always been a proudly independent people. Although loyal to the Georgian kings of ancient times, and always placed in the vanguards of their armies, Svans paid no tribute, and Svaneti was never conquered by foreign forces. Reflecting their pride and independence, many Svans today still live in medieval towers, of which thousands survive. These towers, some with foundations dating back a millennium, were used to protect families in time of war, and some still house ancient treasures, brought up to Svaneti hundreds of years ago to guard them from invaders. Indeed, Svaneti’s museums boast world class collections of icons, religious manuscripts and jewellery. The combination of awe inspiring scenery and jaw dropping medieval architecture is why Svaneti is a UNESCO world heritage site, but there is much more to this amazing region. Although television only arrived in upper Svaneti in 1979, the interiors of many ancient Svan towers now boast wireless internet and cutting edge technology. Svaneti is also becoming a major tourist centre with dozens of hotels and guesthouses, some offering you the chance to stay in a fortress. In spite of the pace of development in Svaneti the Svans remain devoted to their ancient traditions – especially hospitality.

To be a host in Svaneti is an honour, and guests are treated with huge respect and warmth. Visitors are toasted with locally brewed vodka and beer, and feasted with delicious, fresh mountain food. For the Svans, friendship is a sacred bond, but – in this land of mountains and towers – it’s a bond every visitor is happy to make. Svaneti is host to the highest mountains in Georgia, and several of the highest mountains in Europe – several peaks in Svaneti are taller than 5000 meters. Shkhara is Georgia’s highest mountain at 5,201, but the twin-peaked pillar of rock Ushba (410 meters) is the most dramatic mountain in the area. Often called the Caucasian Matterhorn, Ushba is considered one of the most difficult mountains to climb in Europe. Most of Svaneti is cut by deep gorges and is covered in mixed forests, with pine forests stretching up to as high as 2500 meters. A number of major rivers have their headwaters in Svaneti, including the Engruri, whose hydroelectric plant provides about 30 percent of Georgia’s energy needs.

Ushguli is a community of villages located at the head of the Enguri gorge in Upper Svaneti, Georgia. Altitude claims vary from 2,086 to 2,200 metres, thus Ushguli is considered to be the highest inhabited village in Europe. The Ushguli villages contain buildings that are part of the UNESCO Heritage site of Upper Svaneti.
Nowadays in Ushguli area are living about 70 families (about 200 people), yet enough to support a small school. However, the life here is not the easy one – the area is snow-covered for 6 months of the year, and often the road to Mestia is impassable.
By visiting Ushguli one will have unique opportunity to feel the spirit of life in such a remote area, to get to know incredible architecture (typical Svanetian protective towers are found throughout the villages), to meet locals, and no doubt – to enjoy stunning mountainous landscape.

Only in 1935 a road was built to link Mestia with the outside world. The road was made and electricity was later brought to Mestia as well. By the way – only in 1968, it was granted a status of a townlet.Located in the heart of Svaneti, 1500 meters above sea level, Mestia is the center and cultural heart of the Svan people. Svans have their own traditions, unique architecture, cuisine, language which differs from official Georgian.Nowdays Mestia becomes the main tourists’ attraction, it is being renovated and infrastructure developed. Due to renovated airport this former towlet becomes easy reachable, tourist come here not only in warm season when one can climb up to the mountains enjoy amazing mountainous landscapes and extraordinary architecture but in winter as well – recently here was opened modern skiing resort.
Despite its small size, the townlet was always an important centre of Georgian culture for centuries and Mestia is really worth to visit place, which welcomes its visitors with heartily local people, tasty cuisine, unique Svan towers-houses and unbelievable beautiful landscapes. contains a number of medieval monuments – churches and forts – included in a list of UNESCO World Heritage Sites.