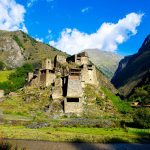 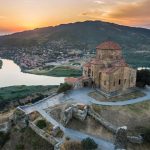 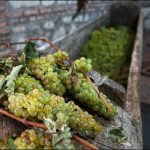 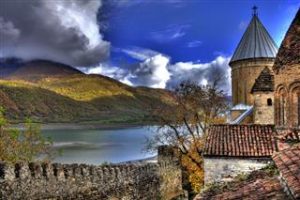 Stretching from the glorious ancient capital Mtskheta in the south to the soaring peaks of the Greater Caucasus in the north, the Mtskheta-Mtianeti region is Georgia as it should be. The legendary Georgian Military Highway, one of the world’s most beautiful roads, winds it’s way up this region, through steep wooded valleys, up ravines and finally over the 2300 meter Cross Pass and down again. The area not only takes in the amazing Kazbegi region, home to glaciers, gorges and the 5047 meter mount Kazbek, but also the cultural treasure trove of Khevsureti, and Georgia’s most developed skiing resort at Gudauri. Best of all, the whole province is just a short drive away from Tbilisi, meaning visiting the wonders of the area couldn’t be easier.

Ananuri Castle Complex is located in the beautiful landscapes on the shores of Zhinvali reservoir of bright blue colored water. It was a seat of the Dukes Eristavis of Aragvi, a feudal dynasty which ruled the area from the 13th century. The castle was the scene of numerous battles.

In 1739, Ananuri was attacked by forces from a rival duchy, commanded by Shanshe of Ksani and was set on fire. The Aragvi clan was massacred. However, four years later, the local peasants revolted against rule by the Shamshe, killing the usurpers and inviting King Teimuraz II to rule directly over them. However, in 1746, King Teimuraz was forced to suppress another peasant uprising, with the help of King Erekle II of Kakheti. The fortress remained in use until the beginning of the 19th century. In 2007, the complex has been on the tentative list for inclusion into the UNESCO World Heritage Site program.
The fortifications consist of two castles joined by a crenellated curtain wall. The upper fortification with a large square tower, known as Sheupovari, is well-preserved and is the location of the last defense of the Aragvi against the Shamshe. The lower fortification, with a round tower, is mostly in ruins.

One of the most important churches in all the Georgia – Svetitskhoveli Cathedral is located in Mtskheta town, as it is the most religious town of Georgia, it is the place where Christianity in Georgia takes its origin.
It was erected by architect Arsukidze in 11th century, in the place where the first church in Georgia once stood in the 4th. The name Svetitskhoveli what may be translated as “the life-giving pillar”, in Georgian hagiography is explained by breathtaking story. In the 1st century AD a Georgian Jew from Mtskheta named Elias was in Jerusalem during Jesus crucifixion. Elias took Jesus’ robe from a Roman soldier at Golgotha and brought it back to Georgia. Returning to his native city, he was met by his sister Sidonia who after touching the robe died from the emotions engendered by the sacred object. The robe could not be removed from her grasp, so she was buried with it. Later, from her grave grew an enormous cedar tree. St. Nino ordered to chop the cedar down in order to build the church. Seven columns were made. However the seventh column had magical power and rose by itself into the air. It returned to earth after St. Nino prayed the whole night. It was further said that from the magical seventh column a sacred liquid flowed that cured people of all diseases. In Georgian “sveti” means “pillar” and “tskhoveli” – “life-giving” or “living”, hence the name of the cathedral.
The place where Sidonia is buried with Christ’s robe is preserved in the Cathedral and the icon portraying this event can be also seen there.
Svetitskhoveli is the second largest church building in the country, after the recently consecrated Tbilisi Sameba Cathedral, and is listed as an UNESCO World Heritage Site along with other historical monuments of Mtskheta.

Stepantsminda (more known under Kazbegi name) is a small town in the Khevi region of northern Georgia. The town is located at an elevation of 1,740 meters above sea level. The town is dominated by large mountains on all sides. The most notable mountain of the region, Mt. Mkinvartsveri (more known under Kazbek name) of 5033 m, lies immediately to the west of town.
According to tradition, Stepantsminda, literally “Saint Stephan”, was named so after a Georgian Orthodox monk Stephan, who constructed a hermitage at this location on what later became the Georgian Military Highway. It came under the control of a local feudal magnate, the Chopikashvili clan, who were in charge of collecting tolls on travelers in the area in the late 18th century. After the expansion of the Russian Empire into the Kingdom of Georgia in the early 19th century, the people of the region revolted against Russian rule. However, the local lord Gabriel Chopikashvili, son of Kazi-Beg, remained steadfast in his loyalty to Russia and helped to suppress the revolt. In return, he was promoted to officer in the Russian Army. He adopted the surname Kazbegi, and the village under his control was also frequently referred to as “Kazbegi”. The name was officially changed to Kazbegi already under the Soviet rule in 1925. Gabriel Chopikashvili-Kazbegi’s grandson was the famed Georgian writer Alexander Kazbegi, who was born in this town. In 2006, the town reverted to its original name of Stepantsiminda. Stepantsiminda is known for its scenic location in the Greater Caucasus Mountains, and is a center for trekkers and mountain climbing. Local attractions include the Alexander Kazbegi Museum and Ethnographic Museum in town, and the Gergeti Trinity Church outside of town, as well as Mount Kazbegi itself and the alpine meadows and forests of the surrounding Kazbegi Nature Reserve.

Sno Fortress is located in village Sno, on the bank of the Sno – right estuary of the Tergi River. The fortress is erected on a stony hilltop, a hardly accessible place. The fortress is surrounded by a virtually circular wall and has a pyramidal tower in the center. According to scholars, it must have been built in the 16-17 cc.
The fortress served to close and defend the gorge that contained shorter routes to Khevsureti, Pshavi, Mtiuleti (through Gudamakari gorge). The fortress belonged to the Ghudushauri family. According to Vakhushti Bagrationi, “here there is the small Ghudushauri fortress that is now strong and sensible”.

Shio Mghvime Monastery Complex representing one of the remarkable religious and cultural centers of feudal Georgia, is located on the left embankment of the Aragvi river in Mtskheta District, some 40km away from Tbilisi. Based on historical sources, the monastery was founded in the middle of the 6th century by John Zedazneli’s pupil Shio. Father Shio spent the last years of his life in a dark deep cave where he was buried according to his will after he passed away. His tomb is recognized as the holy place in Shio Mghvime Monastery.
Shio Mghvime Monastery Complex consists of John the Baptist’s domed church, the upper church built in 11 c., the dining hall and the chapel near the monastery. John the Baptist’s church with plain and strict features is almost plunged in earth. It represents one of the most remarkable examples of Georgian dome architecture built by St. Shio’s initiative in 550-560s.

Samtavro Monastery, located in Mtskheta town is built on the place where “Zemo Ecclesia” (Upper Church) was located in the 30s of the IV century.
The present Church of the Savior was built in the 1030-1040. The archeological excavations revealed the remains of a large church that had been standing here before XI century. Eastwards of the Church of the Savior there is a small early medieval church of St. Nino.
Samtavro Monastery, together with other historical monuments of Mtskheta has been inscribed upon the World Heritage List of the Convention concerning the Protection of the World Cultural and Natural Heritage since 1994.

Mtskheta is one of the oldest cities of the country of Georgia (in Kartli province of Eastern Georgia), located ~ 15 kilometers north of Tbilisi at the confluence of the Aragvi and Mtkvari rivers. Due to its historical significance and numerous ancient monuments, the “Historical Monuments of Mtskheta” became a UNESCO World Heritage Site in 1994.
Mtskheta was the capital of the early Georgian Kingdom of Iberia during the 3rd BC – 5th century AD. However in the beginning of 6th century AD King Dachi I Ujarmeli, the successor of Vakhtang I Gorgasali, moved the capital from Mtskheta to the more easily defensible Tbilisi according to the will left by his father. However, Mtskheta continued to serve as the coronation and burial place for most kings of Georgia until the end of the kingdom in the 19th century.
As Mtskheta is the most religious city of Georgia it is the place where Christianity in Georgia takes its origin, here is located one of the most important churches in all of the Georgia – Svetitskhoveli Cathedral. At present town is being newly renovated and waits for visitors who want to feel the history of past.

Jvari Monastery stands on the rocky mountaintop at the confluence of the Mtkvari and Aragvi rivers, overlooking the historical town of Mtskheta.
According to traditional accounts, on this location in the early 4th century Saint Nino, a female evangelist, credited with converting King Mirian III of Iberia to Christianity, erected a large wooden cross on the site of a pagan temple. The cross was reportedly able to work miracles and therefore drew pilgrims from all over Caucasus. A small church was erected over the remnants of the wooden cross in 545 named the “Small Church of Jvari”.
The present building, or “Great Church of Jvari”, was built between 586 and 605 by Erismtavari Stepanoz I. The importance of Jvari complex increased over time and attracted many pilgrims. In the late Middle Ages, the complex was fortified by a stone wall and gate, remnants of which still survive. During the Soviet period, the structure was largely ignored but after the independence of Georgia, the building was restored to active religious use. However, over the centuries the structures suffered damage from rain and wind erosion and inadequate maintenance. Unusual and varied relief sculptures decorate its facades, some of which are accompanied by explanatory inscriptions in old Georgian uncial script. Jvari was listed together with other monuments of Mtskheta in 1996 as a UNESCO World Heritage Site.

Gergeti Trinity Church is a popular name for Holy Trinity Church near the village of Gergeti, up from Stepantsminda (Kazbegi) settlement. The church is situated on the right bank of the river Chkheri (the left tributary of the river Terek), at an elevation of 2170 meters, under Mount Mkinvartsveri (often called Kazbek).
The Gergeti Trinity Church was built in the 14th century, and is the only cross-cupola church in Khevi province. The separate belltower dates from the same period as the church itself. Its isolated location on top of a steep mountain surrounded by the vastness of nature has made it a symbol for Georgia. The 18th century Georgian author Vakhushti Batonishvili wrote that in times of danger, precious relics from Mtskheta, including Saint Nino’s Cross were brought here for safekeeping. During the Soviet era, all religious services were prohibited, but the church remained a popular tourist destination. The church is now an active establishment of the Georgian Orthodox and Apostolic Church.
The church is a popular waypoint for trekkers in the area, and can be reached by a steep 3 hour climb up the mountain, or around 30 minutes by jeep up a rough mountain trail.